- July 01, 2022
Despite a lack of posts in June, I do still exist! As proof, I offer you a newly-minted pair of videos from the Route 66 city of Barstow, California. These were both recorded in April, 2022. The first video is quite short due to a technical glitch that left me with a bad file, but the second video is over 10 minutes, and documents the entire drive from Barstow to Lenwood.
Both of these videos feature a drive across the historic First Avenue Bridge, which was built in 1930 to cross over a rail yard, with nearly 20 sets of tracks running beneath it. The bridge is overall in poor condition, and is slated to be replaced soon by an entirely new structure in a slightly different location, after which the old bridge will be demolished.
The first video begins in downtown Barstow on Main Street (Route 66), then quickly turns north on First Avenue. The ending point for the first video is a parking lot at Casa Del Desierto, a former Harvey House and railroad depot which now houses some Barstow city offices and a trio of museums that are well worth visiting.
The Route 66 Mother Road Museum is near the west end of the complex, and houses a wealth of exhibits and information on Route 66. They also have a great online store here if you are not able to visit in person! The Western America Railroad Museum sits at the east end of the building, and documents railroading history. Finally, on the second floor is the NASA Goldstone Visitor Center, where visitors can learn about NASA's nearby Goldstone Deep Space Communications Complex.
All three attractions were closed during the height of covid, but all three have now reopened for visitors. Please visit the links above to check operating hours if you plan to visit soon.
The longer second video of this Barstow double-bill begins at the exit of the Harvey House parking lot, travels back down First Avenue to cross the bridge southbound, and then proceeds west on Main Street (Route 66), out of town and all the way through the neighboring community of Lenwood. If you have never visited this area of Route 66, these videos will show you just what it looks like, in real-time and uninterrupted. I have embedded both of them below, or you can follow these links directly to YouTube - here for the first video, and here for the second video. 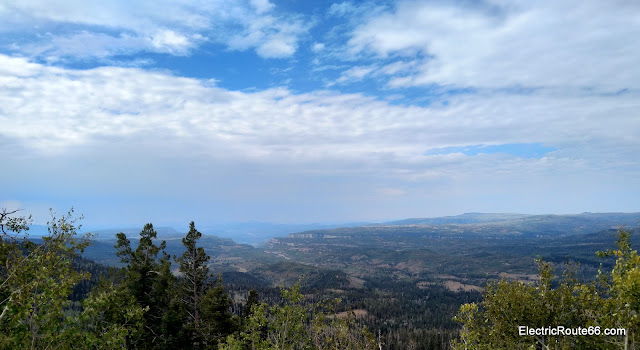 In an effort to get out of the Vegas heat once more, we took another short weekend trip at the end of August. We did our best to avoid the interstate and did a short loop around the back roads of southwestern Utah. I hope you enjoy our photos of some of the sights. Amazing views abound in southwest Utah Day 1: Las Vegas to Cedar City Our two-lane route on Day 1: from I-15 exit 112 to Cedar City   For the first 75 miles of our journey from home in Las Vegas, using Interstate 15 is unavoidable as there is no other through road. We left home in The Blue Spirit with a full charge, which showed as 284 miles on our car. (This is just an estimate. I'm working on resetting the estimate back closer to the car's original EPA range of 310 miles, but this process of recalibration can take a long time in a Model 3.) We exited I-15 at Exit 112 onto Nevada State Highway 170. This two-lane route mostly follows the alignment of old US 91 through Bunkerville and into Mesquite, then takes several
Read more