Showing posts from June, 2019
Show all

On Memorial Day weekend we had an opportunity to help out the Route 66 Co-Op, a non-profit group that recently purchased the Painted Desert Trading Post. This long-closed trading post is considered to be a sort of 'holy grail' of Route 66 destinations. It is located along an abandoned segment of Route 66 east of Petrified Forest National Park in Arizona. In the 1950s, the business closed for good after the highway was rerouted onto a new alignment. Its isolation kept it relatively safe and intact for some 60 years. It has been virtually inaccessible on private land, unless you knew the right people to ask for access, or were willing to trespass and hoof it several miles down abandoned 66.

In recent years, the land surrounding the PDTP has been used for cattle grazing, leading to increased damage as cattle could walk around inside the building, bump into walls, etc. Without action, it would not survive for much longer. The Route 66 Co-Op was able to purcha…
1 comment
Read more 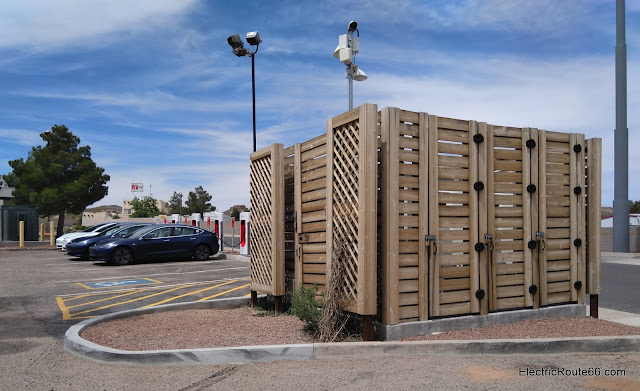 The Arizona Route 66 Fun Run is the biggest yearly Route 66 event in Arizona. The 32nd annual fun run took place May 3-5, and stretched from Seligman in the east to Topock/Golden Shores in the west. We were traveling 66 in The Blue Spirit on all 3 days. Here are some highlights from our EV-driving perspective.

Since this was our first year participating in the whole 3 days of the event, we were a little inexperienced on how best to spend our time, so there was quite a bit that we missed! Many of our friends were there and so we spent some time catching up with them rather than covering all the possible activities that were available. The Route 66 Association of Arizona lines up a whole lot of things to do for their showcase event, so you should head over to their site for a full accounting of what goes on, along with a lot of great photos.