- November 10, 2019
Coming up on November 16, the iconic Roy's Motel & Cafe sign in Amboy, California will be returned to service!

Roy's is one of the most famous historic stops on Route 66, in large part because of its very large Googie-style neon sign, erected in 1959. This sign has been turned off since the 1980s and its restoration has been a long term project that is finally coming to fruition. See the official flyer below, from the town's web site visitamboy.com.

Since we live in Las Vegas, Amboy is pretty close to us and we've been there numerous times, including last month when we visited during the Road Runner's Retreat cleanup weekend. There is no EV charging available at Amboy, but the manager was very interested in pursuing the possibility as they restore more of the town. As an aged, remote, near-ghost town, Amboy has challenges with infrastructure such as power supply and fresh water. These difficulties are complicated and progress is often slow, but the relighting of the sign shows a commitment on the part of owner Albert Okura to continued improvement at Amboy and we wish him all the best.


At the moment, the cafe building does not serve meals, but is open as a gift shop for souvenirs and snacks, and the town's post office is also still functioning. Future plans call for refurbishment of motel cottages and the return of the cafe. We will be at the relighting on November 16 and encourage everyone else who can attend to be there as well to show their support! Before the relighting there will be a raffle, as well as food and a fly-in to the Amboy air strip located right next to Roy's. 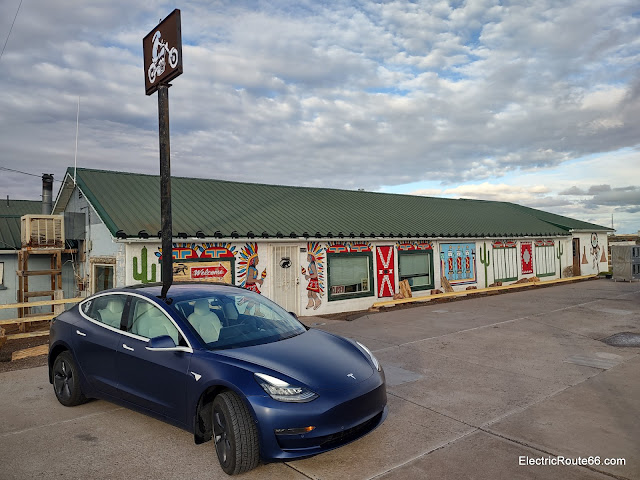